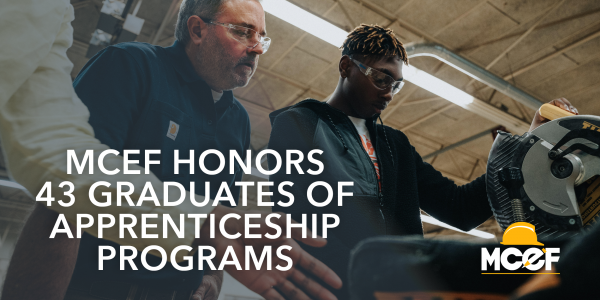 PEARL ― Forty-three graduates of the Mississippi Construction Education Foundation's apprenticeship program were honored recently for completing training requirements that move them one step closer toward becoming journeymen– the highest level in a trade profession.

MCEF's apprenticeship program is approved by the Department of Labor and prepares craft professionals in eight trades: carpentry, electrical, HVAC, pipefitting, plumbing, sheet metal, welding and interior finish. Students must work for an approved employer to be accepted into the four-year program, which includes a total of 576 hours of classroom instruction and 8,000 on-the-job training hours. Students work during the day and take classes at night.

"Construction companies throughout the country, as well as here in Mississippi, are gearing up to hire more workers ― if only they can find them," said Mike Barkett, president of MCEF. "This shortage of skilled labor is having a negative impact on the construction industry and causing the loss of millions of jobs each year. MCEF is working to address this crisis by encouraging interest in technical-based careers and providing training, resources and recognition to help build a ready workforce for Mississippi."

In addition to increased job skills and pay, graduates can take apprentice certificates to a community college and earn up to 32 academic credit hours toward an associate degree.

Graduates were honored June 19 during a virtual graduation and awards ceremony hosted by MCEF at its Pearl headquarters. Also recognized were students with perfect attendance along with outstanding students chosen based on attitude, GPA and class involvement.

Graduating from MCEF’s apprenticeship program were:

MCEF is a non-profit educational foundation that provides NCCER craft training and credentialing in more than 100 career and technical programs across the state. The foundation’s mission is to train individuals for the construction and manufacturing industries in Mississippi.